When Our Bodies Are Not Our Own, We Fight: Continuing The Battle For Reproductive Rights Post Roe v. Wade

On the morning of Friday, June 24, 2022, millions of people throughout the United States woke up to the news that the Supreme Court overturned Roe v. Wade. Waves of shock, grief, and anger spread like wildfire all throughout social media. Former First Lady Michelle Obama stated, “I am heartbroken for the people around this country who just lost the fundamental rights to make informed decisions about their own bodies.”

It’s been a year since SB8 went into effect, and now we find ourselves with an abortion ban that holds more profound and significant consequences. Although we live in an age where we believe in being free to express ourselves, there are forces in office who wish to strip us from our rights and police our bodies. To deny our rights to abortion and force their radical agendas within the laws that govern us is, in and of itself, an assault. But, it begs the question: why do these people deserve to sit upon their thrones and judge what we choose to do with our bodies?

The Supreme Court’s decision to overturn Roe v. Wade had immediate implications for our region. It affected Whole Women’s Health (WWH), the primary abortion clinic in McAllen, ultimately forced to follow the law and cancel appointments for hundreds of patients that very same day.

On July 6th, Whole Women’s Health announced its decision to move its Texas clinics to New Mexico, where abortion is still a protected right. Anti-abortion protestors are now traveling from Texas to New Mexico and other areas where abortions still remain legal, following and harassing the Texans who chose to have the procedure done. 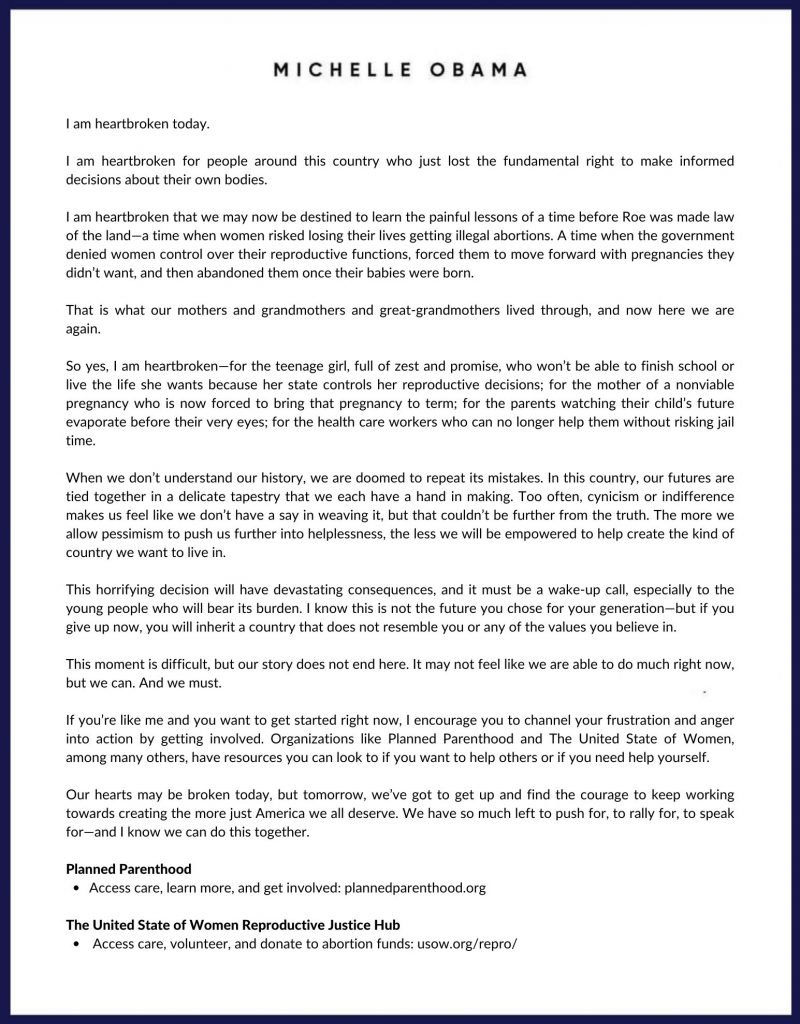 Michelle Obama shares her thoughts on Twitter regarding the overturning of Roe v. Wade.

On Friday, June 24th, South Texans for Reproductive Justice, Planned Parenthood South Texas, and other organizations partnered to organize a Bans Off Our Bodies rally in front of McAllen City Hall. Together, they protested, passed out condoms, and shared information on abortion access and care to all who attended. In addition, seven days after the overturning of Roe v. Wade, STRJ distributed 618 morning-after pills across South Texas.

Following the news of WWH’s departure from their McAllen clinic, STRJ began a crowdfunding campaign to purchase the building. It was an attempt to preserve the history and importance of the clinic as a pillar for reproductive justice regionally. The goal to “create a center for the reproductive movement in the RGV, as well as a base of operations for the contraception program” was set, but the building was ultimately sold on the market.

On September 9th, Touching Infinite hosted a Benefit Show for Frontera Fund at The Dungeon. Derek, who runs Touching Infinite, shared his thoughts regarding the fundraiser, “After I heard about the overturning of Roe v. Wade, I wanted to do my part and thought, why don’t I let Frontera Fund collect the fee at the door instead of throwing a free party? Obviously, I was disgusted by the news, so I wanted to do whatever I could to help fund abortion.”

Musical acts such as Chicago’s Flores Negras and the RGV’s QueenKillahBee, Lil Duende, and Grim Figment helped spread the word and brought the crowds in support of abortion. Together, Touching Infinite and Frontera Fund raised $1,677 to help fund abortion access and reproductive rights.

On September 16th, STRJ collaborated with Outinthe956 and Tiger’s Blood to fundraise for abortion. Outinthe956 and PuroTigersBlood hosted a BBQ fundraiser at Bohemian Place, where they raised a total of $539. Outinthe956’s Ramiro stated, “We wanted to collaborate [on] an event to bring our friends and the community together. We thought to ourselves, why should we just be relaxing when we could also be productive and turned the BBQ event into a fundraiser. After the decision of a fundraiser, the ideas of prizes came out and loteria as well.” He went on to share that STRJ raised awareness for abortion and gave away supplies such as Plan B pills to attendees.

Promoting and hosting fundraising events is crucial in the fight against abortion bans. However, the battle continues to extend beyond our local region.

On Friday morning, July 8th, President Biden signed an executive order to protect reproductive health services by expanding access to abortion pills, strengthening birth control coverage, and helping people criminally charged for an abortion seek legal help. The order also attempts to protect the rights to privacy of people who use period tracking apps and doctors who perform the procedure under emergency conditions.

However and despite the executive order, Senator Lindsey Graham proposed a bill on September 13th that would ban abortion after 15 weeks of pregnancy in all 50 states. Press Secretary Karine Jean-Pierre expressed in a statement, “President Biden and Congressional Democrats are committed to restoring the protections of Roe v. Wade in the face of continued radical steps by elected Republicans to put personal health care decisions in the hands of politicians instead of women and their doctors, threatening women’s health and lives.”

“Although our organization has a national presence, my work has been exclusively in Texas and it has been this line of work for almost ten years. I’ve seen first hand the damaging effects of legislation passed at our state level and court decisions that have revoked access to abortion care not just when we need it but when we want it.” Nancy Cárdenas Peña, the Texas Director of Policy and Advocacy for the National Latina Institute for Reproductive Justice, expressed the importance of fighting back against politicians like Graham. She also stated:

“While we organize and fight back against further restrictions, we delegitimize the structures that seek to erase our autonomy to make decisions that are best for ourselves and our families. This doesn’t just include fighting against national or state bans, but it includes fighting against restrictions that make it difficult for people to be able to parent their children in a healthy environment. Our movements are tied just as our struggles are.”

Necessary Resources To Keep In Mind

Nancy Cárdenas Peña gave a nod to Frontera Fund and STRJ for their work and education for our communities. “Information on accessing resources, whether it be self-managed or in the clinic, is still available online, including organizations that offer legal advice and assistance,” she said.

There are many resources available that may help people gain access to safe abortions, abortion pills, educational resources, birth control and Plan B pills, and reproductive healthcare. Visit the National Network of Abortion Funds and Planned Parenthood South Texas for information on how you may gain access to reproductive care and abortion access. A few abortion funds in Texas to contact today include:

Our Fight Is Not Over

It’s been about three months post the overturning of Roe v. Wade, and although things are not getting any better, the fight is only growing stronger. Recently, on September 29th, Frontera Fund, alongside other Texas Abortion Funds, brought the fight to court in Austin, Texas. They announced a press conference to sue Texas Attorney General Ken Paxon earlier in the week, of which they succeeded, causing Paxon to flee.

Regardless of Paxon’s negative remarks towards the actions and messages these activists were sharing with the world that day, their fight was a testament and small victory towards the fight for reproductive freedom. 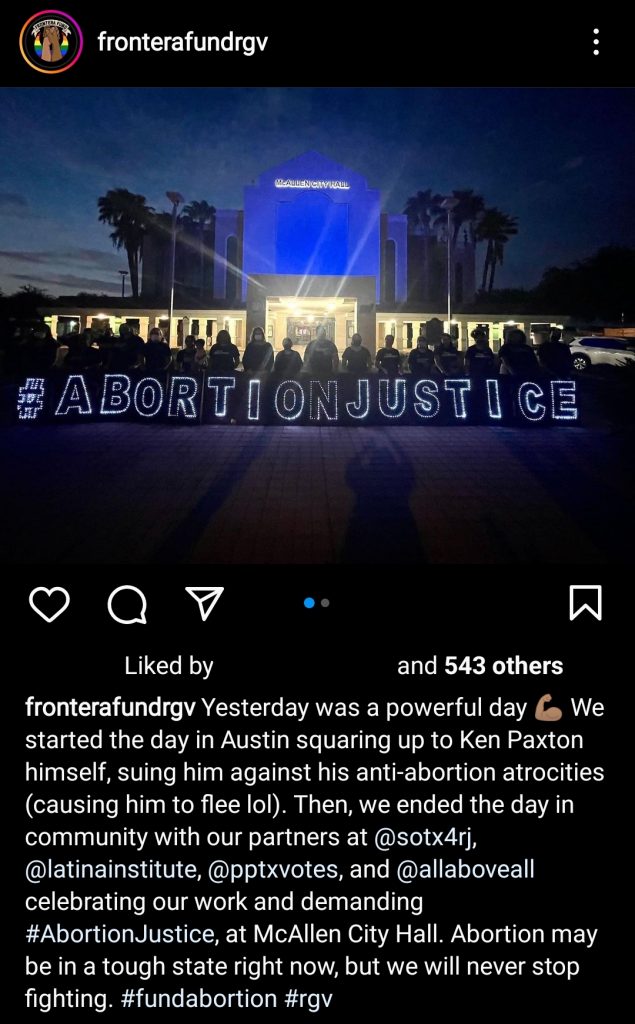 “Our work is more critical than ever… We can dream and create a world where a court decision, much less a law from the state, doesn’t overturn our access to abortion care from one day to the next… Regardless of a court decision, abortion is a moral good, and our work continues as such… For folks who are looking to invest in this work, what kind of world do you envision creating where we no longer have to subject ourselves to crumbs from the state to achieve true bodily autonomy in the landscape of reproductive justice?”

If you are wondering what you can do to help fight against the current injustices to our reproductive rights and health, make sure you, along with your friends and loved ones, are registered to vote for the upcoming midterm elections on November 8, 2022.

This election is crucial in voting out the people currently in power who are detrimental to our right to choose for ourselves and our bodies. Support and elect candidates who fight for reproductive rights, abortion access, LGBTQIA+ issues, immigration reform, gun safety, and equality for all.

Together, we have the power to choose a better world where we can have access to safe abortions right here at home. In the end, our tenacity will keep us stronger, together, and a force to be reckoned with. 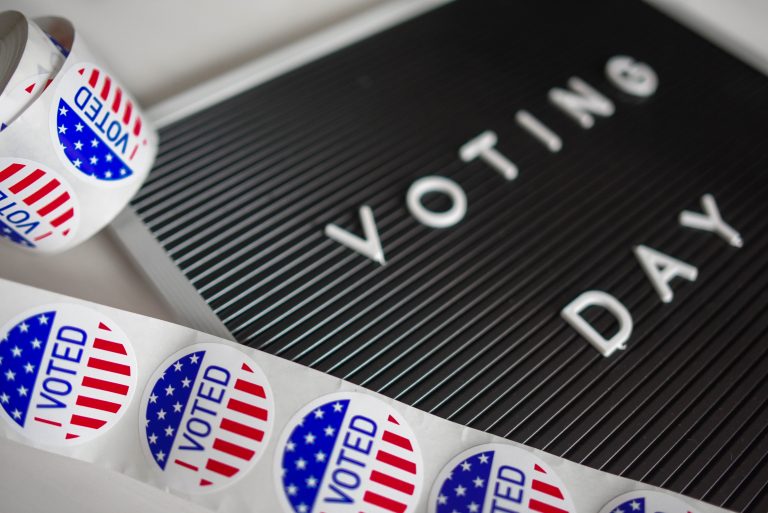 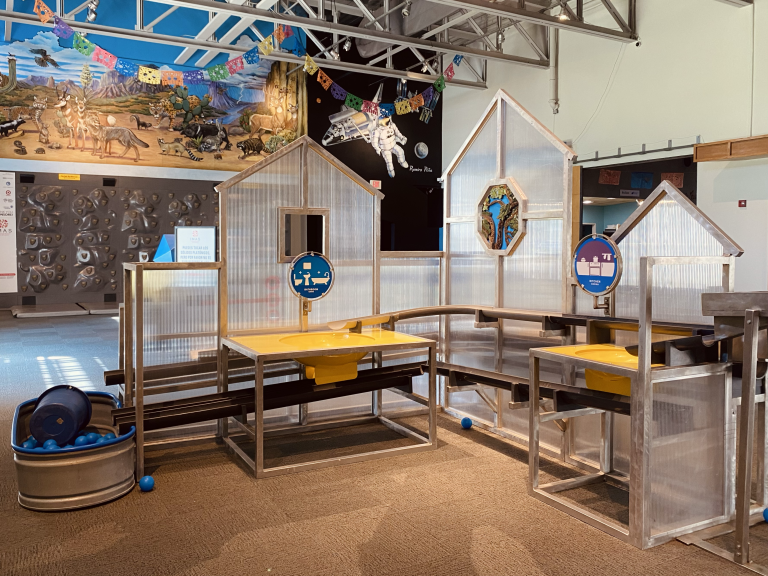 CRT: The National “Debate” and a Chicano View of It
The RGV's Response to Disaster Capitalism
Beyond the Storm