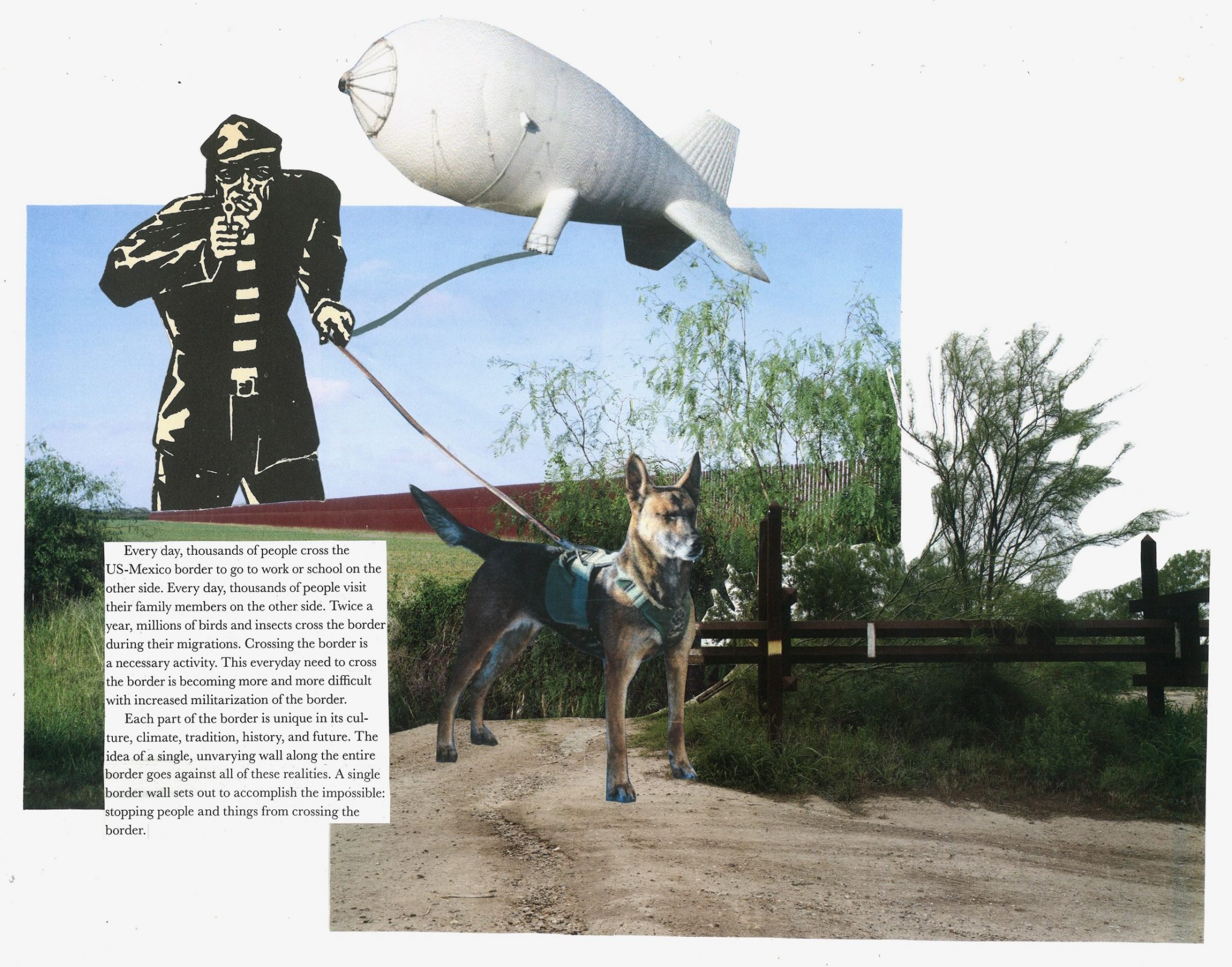 LA FRONTERA — Like the waters of the mighty Rio Bravo, life on either side of its banks never stays still.  The history of the borderlands is rich, storied and hard to condense into a few words but the one constant is change.

Cities like McAllen, Brownsville, Reynosa, Matamoros, Laredo, El Paso, and Ciudad Juárez all have continued to grow and flourish to different extents, but passing through the border has become an increasingly strenuous, dangerous and scrutinized trek.

Many people living in our regions have strong ties to both sides, have family members or have crossed the river themselves for a life in the U.S. Currently, the influx of people making this intense journey hail from Central America and the situation is facing tons of pressure and criticism from folks ignoring the long-standing impact of American imperialism and intervention.

Folks on the center, right, and far-right call the humanitarian crisis at the border an ‘invasion’ but without a background in the history of the U.S. empire, it’s hard to see the whole picture.

One of the ugliest images to come out of 2021 was the Border Patrol horsemen attack against dark skin Haitian immigrants in the river near Del Rio. Evoking painful parallels to centuries of state violence against Black and brown bodies in this part of the country and elsewhere.

As the land changed ownership…from Indigenous to Spanish to Mexican and finally now existing under American hegemony policies and attitudes towards people living or passing through the Valley has shifted as well.

What has also changed immensely is the political landscape in the last few hundred years. As Spain lost its colonial grip regionally in Central and Southern America, there were frequent revolutions and struggles for power. People-powered leftist governments led nationals such as El Salvador, Nicaragua and Guatemala, countries that now produce a high volume of refugees/asylum seekers and migrants. More on the elephant in the room later.

In recent decades people in the border communities have seen it all, while the migrant populations have had to live, suffer and fight against it. All in hopes of a successful trip into the so-called “Land of the Free.”

We’ve seen cages and mass detention centers erected in our municipalities. We’ve long noticed increased state presence; more high-tech border surveillance like big ‘eye-in-the-sky’ balloons, more armed personnel like the national guard…following the nation’s directive to treat the situation like a war-zone or an invasion instead of the humanitarian disaster the border has become.

As a result of this endless expansion and militarization of border patrol, people crossing the river from the (global) South have been hunted, criminalized and shipped off of United States soil. Democratic presidents have taken a slightly softer stance but migrants still are subject to be uprooted and removed by ICE. Infamously, under Barack Obama, 3 million immigrants were deported.

While Republicans have been more stern, (looking at you, Donald Trump and ‘Zero tolerance’ doctrines) the current Democratic presidential administration hasn’t done much to fundamentally change the treatment of immigrants including the continuation of Trump-era

Title 42 and the Migrant Protection Protocols. These two protocols have resulted in tens of thousands of individuals living in camps and tents just across the border in Mexico. These camps leave migrants vulnerable to violent attacks.

We’ve lived next to more arrests, more separations. There have been more out of towners, whether that is new agents and guardsmen, ‘tough-on-immigration’ republicans or national media outlets rushing to put their spin on the 2019 and 2021 migrant caravans and explosions in foot traffic to the nation’s southern border. Governor Abbot’s Operation Lone Star has sent an influx of DPS troopers and state guardsmen to further militarize the border. Starr County Judge Eloy Vera called out the stunt as a political ploy in this Spectrum News piece.

Abbott has also committed state funds and support to complete a border wall. The incumbent governor used the border wall and immigration as the backdrop for his reelection campaign. It’s always nice to feel like a pawn…said no one ever.

It’s almost like a large interconnected system with financial, and not human prosperity, as the focus leads to these health and humanitarian crises.

In September of 2021, we saw a new demographic of migrants experience border brutality in a new way. Haitian immigrants, not Central Americans, were on the receiving end of violent and repressive scenes at Del Rio’s section of the Rio Grande River. Biden’s approach is hardly planned and it’s hard to decipher how he feels or if he will take any decisive action. First, he says not another foot of border wall, then he stands idle as more land is taken by Abbot and Texas.

The White House put out a strategy to mitigate these problems including addressing economic insecurity, combating corruption, promoting respect and human rights. These all sound admirable but there should always be skepticism when the problem maker wants to turn into the problem solver.

One thing; the U.S. sure as hell won’t commit to is addressing the problem at the root, which would mean confronting the beast of capitalism, imperialism, and Amerikan intervention in other nations’ affairs for decades, centuries.

US Intervention in Central America

This entire picture could look very different without America’s insistence on starting centuries-long issues and continuing to stick its paws deep into the shit of Latin American countries. Hate to break it to Republicans or any other pro-American shill for that matter but this entire situation could be categorized as self-inflicted.

Since the Monroe Doctrine of 1823, the United States maintains the position that they ought to have a say in the political happenings. No new European colonies could be created but as more nations gained independence, the U.S. positioned itself as caretakers for the western hemisphere, imposing its will on the region.

This doctrine put the United States on a collision course with multiple Central American movements and governments. In the late 1970s and early 1980s, the Sandinistas, a left-wing liberation front, took power in Nicaragua following the removal of their dictator. Ronald Regan turned his attention to El Salvador, Honduras, and Costa Rica by funding ‘contra’ rebels that fought at all costs to attack leftist movements.

The decades following World War II were marred by proxy struggles and conflicts that made up the ‘Cold War.’ Influence from the Soviet Union, Cuba, and Vietnam were huge concerns in Washington, and the people living on the ground in this region were the big losers with millions being slain in proxy and drug wars.

The 1980s and 1990s were a disaster for these countries. Hundreds of thousands were killed and millions more lost homes, livelihoods, and stability.

These effects can still be felt in the present day, as of 2017, El Salvador has the highest murder rate in the world, followed by Honduras and Venezuela. Belize is also in the top 10, according to WorldPopulationReview.com.

Also, in typical Valley fashion, while the U.S. government sends more men with guns, more charities and good samaritans have stood up to help asylum seekers.

Making sense of talk on immigration and asylum seekers

In my humble opinion, one of the biggest parts to taking the correct position is knowing true history rather than the far-too-common, white-washed  “brown people the devils here to invade our land and take our jobs” narrative

Also, in typical Valley fashion, while the U.S. government sends more men with guns, more charities and good samaritans have stood up to help asylum seekers.

It might not seem like an actual path forward, but compassion for migrants is key. There is nothing more Amerikkkan than not caring about other humans. It is our duty to rise above the rhetoric about invasions and caravans. It’s crucial to remember that if a mother is willing to drag her children thousands of Kilometers to a land that won’t be friendly there likely is a good reason they left home in the first place.

Amerikans in 2022 don’t have any right to judge the plight of migrants while we sit comfortably on stolen land and benefitting from exploited labor. Power to the people and power to the migrants that treat the border like all of Amerikkka should be treated, illegitimate.

The ADA turns 32: Remembering Its Legacy​
“Smart” but Harmful: The Risks and Implications of Surveillance Technologies in the U.S.-Mexico Bord...
Commentary: Police Budgets Are Strangling Our Communities