Fans of the NFL are teeming with excitement as the Super Bowl is on the horizon. The thrill is palpable as people gather to watch their teams do battle on the gridiron. The Rio Grande Valley has its own customs when it comes to the sport. From the excitement and pageantry of high school football on Friday nights to college football Saturdays, and of course, the aforementioned NFL on Sundays. Football has a pronounced presence in many homes.

You might be familiar with this scene: Sunday afternoon, putting the TV in the garage, setting chairs out, drinking cold beer, firing up the grill. It’s an event, especially if the Dallas Cowboys are playing. You’ll see generations of fans that have developed over the 61 years of the Cowboys’ existence. It’s evident in the ubiquitous Cowboys caps, t-shirts, and jerseys worn like uniforms of a fanatic army transmitting their hopes and desires telepathically to the players on a field over 500 miles away. And when and if the Cowboys actually win? The jubilation can spill into the streets in a culturally unique celebration.

Those of us that like sports live it deeply in Texas. For better or for worse, it forms part of our identity. The Valley itself has an impressive appetite for sports. Perhaps due to the relative distance from the major population centers that host professional sports teams, the Valley’s sports fandom is rooted firmly in broadcast media. We see things on a TV screen or on our phones. And as we know, distance can falsely represent safety, or it can even foment disengagement.

We view things from a distance and sometimes convince ourselves that problems or injustices that stir in other parts of the world don’t affect us. Because let’s be honest, sports, and by extension sports media, are inextricably linked to social issues. Those issues regularly bear out and are impossible to ignore since many of the key participants in sports come from marginalized communities. To expect them to work in silence is in itself an exercise in privilege; a privilege of the whitest sort, to be sure, and historical at that. It provides a convenient and flimsy basis for resentment of the players and their admittedly exorbitant salaries, and it leads to vaguely racist overtones. We shouldn’t be surprised at this. Racist overtones are found in all directions if one cares enough to see them.

Because let’s be honest, sports, and by extension sports media, are inextricably linked to social issues. " 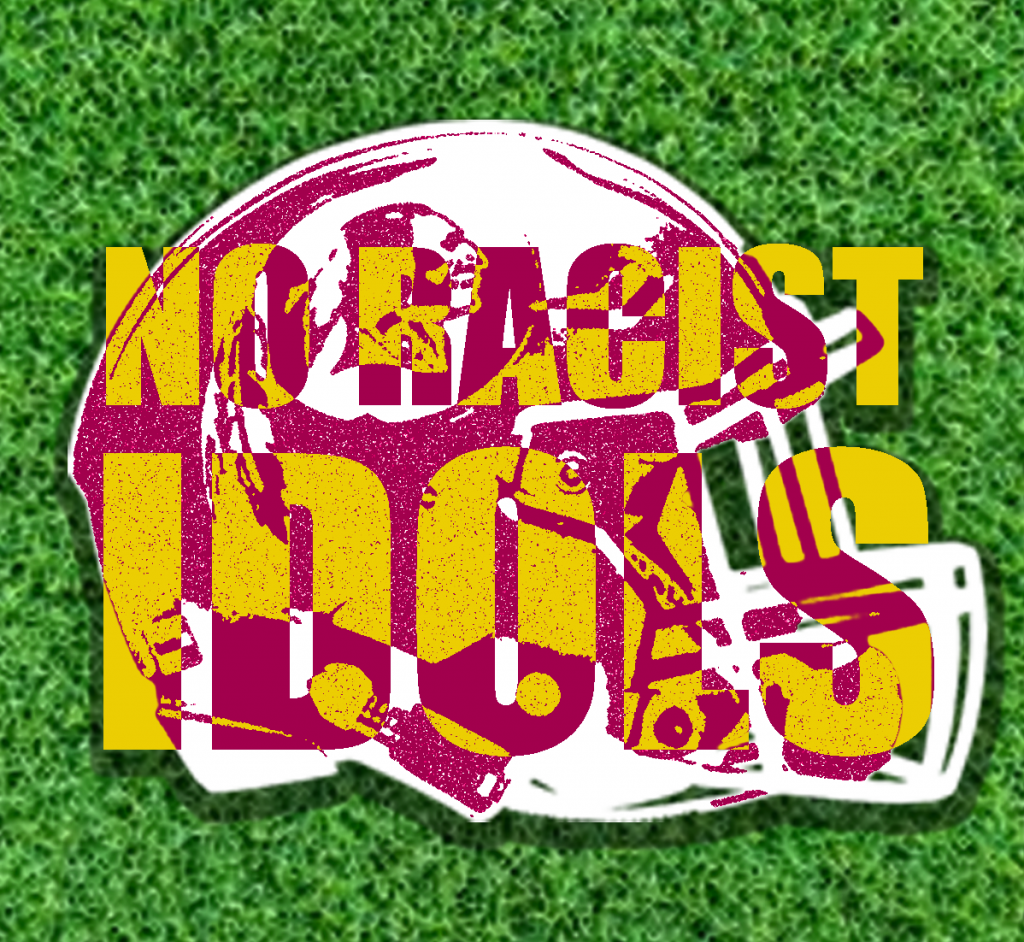 Driving up the Valley on a late September Friday evening, I noticed Weslaco’s stadium lit up with excitement. I also noticed a big screen to see the action on the field and was struck by how much money must have gone into that. That’s another issue for another day, however. A few miles further along the expressway was Donna’s stadium, equally lit up with excitement and a big screen. Then, in a flash, it struck me. I remembered Donna high school’s nickname: the Donna Redskins.

The nickname was bestowed upon the high school a little over a hundred years ago. Along with it came practices that are problematic at best. These include the wearing of headdresses and moccasins and include chants and “war cries”, in addition to a girls’ popularity contest called the “Indian Sweetheart”. The football players themselves emerge from a teepee in their home stadium, which is nicknamed “the Reservation”. These practices have now been blessed as “tradition”, and as such, are held onto for dear life by many who wish to recall what would be simpler times for some, or more oppressive times for others. These traditions, however quaint, are still troubling and don’t take away from the fact that the word itself, “redskin”, is largely recognized as a racial slur.

The nickname itself is based on hegemonic practices by which white settlers to this region imposed their standards and belief systems. This included the use of pejorative terms to further normalize the dominance of a white minority. The nickname was used in other places as well, including the National Football League’s Washington based franchise and in other schools around the country. However, the troubling nature of a school continuing to use this nickname in the Rio Grande Valley in this day and age is especially incongruent.

The disregard for Native people is evident in the traditions that include the term “Indian” and in the usage of headdresses and stereotypical garments. This negligent appropriation is equivalent to erasure. The subconscious implication is a further marginalization of Native existence, which is paradoxical because the vast majority of ethnic Mexicans in the RGV have Native ancestry. This causes a cultural and racial fissure and plays into the disengagement and perceived safety that distance provides, though on a psychological rather than geographical level. It also causes a marginalized community to further identify with the dominant culture, and in this case, it harkens back to the racial violence that paved the way for that particular dominance.

A Little Bit of History

Manifest Destiny held that the land and the advancement westward was the (white) American birthright. Violence was required to intimidate and exterminate the people that occupied those lands. The people in this part of what would become Texas were a mix of ethnic Mexicans and Native Nations. The desire by many to deny the fact that the West was won with extreme violence is curious at best. The practitioners of some of the most intense violence in the state of Texas were a band of government officials known as the Texas Rangers. And as a part of nation-building and glorifying an altered past, they’ve been mythologized incessantly and almost perversely.

As Monica Muñoz Martinez discusses in her important work, “The Injustice Never Leaves You”, the violence goes beyond mere numbers. Martinez shows a determined and concerted effort to terrorize and intimidate ethnic Mexicans through brutality and murder. These efforts have an enduring effect and hinder any notion of justice as celebrated by those who conveniently wish to look the other way and convince the victims and their descendants to “get over it”. Because the veneration of the Texas Rangers is cultural, it’s one of racial imposition, and it’s evident to this day.

The Major League Baseball team in Arlington, Texas, began life as the second incarnation of the Washington Senators in 1961 before they moved to Texas in 1971. Finding themselves between Dallas and Fort Worth, they decided not to hitch themselves to either community but to assume the identity of the entire state. According to a brief history on MLB’s website, choosing a nickname was a simple endeavor. They chose Rangers, explaining, “The organization unofficially was created by Stephen F. Austin, one of the key figures of the Texas Revolution, with a long and colorful history deeply imbedded [sic] in the psyche of the state.”

It’s a long and colorful history indeed. Painted with the blood of countless victims of color, but they’re obviously not referring to that, nor are they referring to white supremacy when they mention the “psyche of the state”. But they’re not the ones to ask since their ideas are swept with broad strokes of misinformation. The truth shines through, however, in the light from their burning books. It shines in efforts to reckon with state-sanctioned violence and its repercussions. It’s what Martinez refers to in her book as “a praxis against forgetting”, citing what Americo Paredes referred to as “anamnesis”. Part of that requires reflection on language and how it’s used to demean and dehumanize, or to celebrate actions or individuals that directly perpetrated oppression. In the case of the Redskins and the Rangers nicknames, we are looking at tools of white supremacy and the continued normalization of its violent standards. Because to deny or ignore the effects of these imposed nicknames is to condone the violence and oppression that are the established roots of these terms.

Will we see changes in this realm? More than likely not in our lifetimes. The ideological battleground that pits social progress and justice against conservatism and notions of tradition is squarely here in the state of Texas and will be for some time to come. The lines are being drawn daily as assaults on women’s rights are also normalized. The state is becoming a safe haven for patriarchal regression and overt white supremacy. The forces that defend these notions are entrenched and passionate about maintaining discriminatory standards. An even more troubling point also involves the intense resistance to team name changes that will inevitably come from POC and ethnic Mexicans, to be specific because white supremacy is a technology that doesn’t require the sole participation of white people in order to be operational. In fact, the all-American institution of white supremacy gets nowhere and gains no traction without the active participation and support of POC. Donna ISD has made a concerted effort to present Native people who are unoffended by the nickname and the associated practices, in effect using these Native people as shields from any criticism that may come their way. It’s a form of scapegoating that can’t and shouldn’t be ignored. These supposed good relations between the school district and the Native community recall other historical incidents of scapegoating, which also resulted in oppression.

It took George Floyd’s murder and the worldwide outrage afterward to push the Washington NFL franchise to drop the Redskin nickname, and the Cleveland Major League Baseball franchise followed suit earlier this year in dropping their nickname, Indians. What will it take for Donna ISD to recognize that “Redskin” is a derogatory term that should not be praised or glorified? How much will they resist? From all indications, it will be a long, hard fight, and the resistance to changing the Texas Rangers nickname will be even more intense. It will undoubtedly be posited as yet another front in the ongoing “culture wars” that elected officials on the right cravenly use as a flimsy political issue and which their voters use as a way to stave off things that they find threatening. It would be comical if it wasn’t a continuation of damages incurred.

At the risk of appearing sentimentally simplistic, it comes down to being a mission of changing hearts and minds. It involves breaking from standards that have benefited a select few and finding value in our own communities’ solutions and addressing our own communities’ needs.  It entails education and recognition of errors and terrors of the past; who did what and why. It includes fomenting a deep dedication to refraining from reverting to the discrimination, the dehumanization, and violence of the past. As certain despicable incidents have shown, hate and intolerance is always lurking in a land that is consistently in denial.