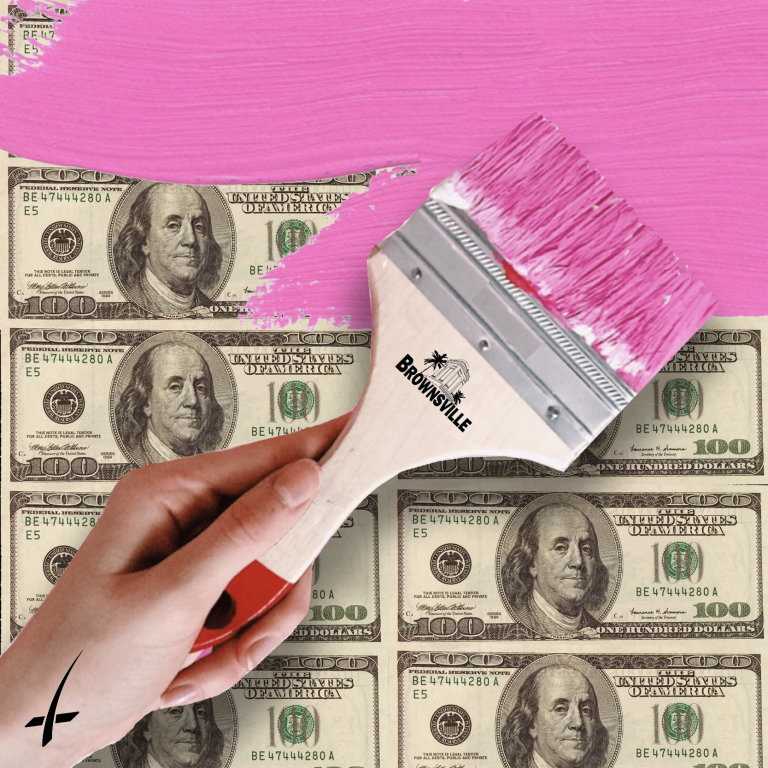 It has been half a year since the City of Brownsville announced the hundred thousand mural program funded by SpaceX as part of their downtown revitalization efforts. International artists have been flown in and given first dibs of Brownsville’s largest and most prominent walls while the mural promised to a local Rio Grande Valley artist has yet to be announced. It begs the question, “How long does it take to find a “worthy” artist in the RGV to paint the last mural funded by Elon Musk?”

LA based artist Ted Kelly’s “Pepto-Bismol” BTX Mural cost $20,0000 and was painted on the Capitol Theater north wall on 13th and Levee in September 2021. It sparked a rage of comments online by the community who rightly called out the lack of equity and support for local creatives in addition to unappealing design. The City followed up with a mural by Sofia Castellanos, a Mexico City based muralist.

In contrast to the pink wall, Sofia’s mural included the assistance of local artists and volunteers who were paid for their work. Her mural is displayed on East 11th and East Washington Streets across the street of the Carlotta K. Petrina Cultural Center who’s members assisted in the process. Titled, To the Other Side of the Cosmos, it features imagery that speaks to the local experience intermixed with the theme of space.

According to City documents acquired through a Freedom of Information Act request made in January 2022 the Brownsville Museum of Fine Arts requested $24,300 from the city for the second mural. The BMFA paid Castellanos $15,000 and the remaining was distributed among themselves and volunteers.

The documents provided reference previous conversations that we are not privy to. Per the FOIA request, it seems like the BMFA took on an intermediary role after the outpour of community comments. A Memorandum of Understanding with the Museum was being worked on by September 15th days after critiques from the first mural.

With the BMFA involvement one would hope that the search for an artist progressed. Documents show that conversations between the BMFA, SpaceX and the City of Brownsville regarding the mural stopped in late 2021, with an online meeting scheduled on November 11th 2021. That was the last communications given to us by the city per our FOIA request.

When questioned on the progress of the mural and artist search in an email on February 17th, Marina Zolezzi, Chief of Staff for the City of Brownsville responded midday on March 4th stating the following: “Thank you for reaching out regarding the specifics for the third mural to be painted in Downtown. As of now, an artist has not been identified and the location has not been identified. Regarding next steps we hope to have additional information in the next couple of weeks regarding the timeline and selection process.”

Meanwhile local artists like Josie Del Castillo are left waiting. The muralist has raised questions online and points to the lack of specifications for the proposals. The response from politicians who have been very vocal about public art lately is crickets. It showcases how critical creative infrastructure is missing in the RGV and how those in places of authority politically and as gatekeepers of cultural institutions have failed to build this resource up.

Why does it seem like it is so much easier to bring outsiders in to paint one of the region’s largest art projects than to support locals? To make things easier for them we created a list of Rio Grande Valley artists and creatives (in alphabetical order per last name) who have shown their capacity to paint a mural that size and deserve the recognition: